Welcoming Our Newest NASCO Board Members 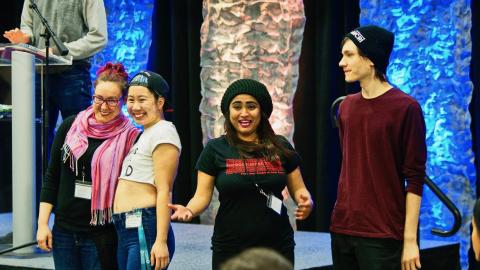 The 2019 NASCO Board of Director election results are in! We thank you, our membership, the board, and our nominees for participating in one of the most important aspects of being a part of the North American Students of Cooperation – electing leadership that will drive our organization and our movement forward. As pictured from left to right…

Rek Kwawer became involved with the cooperative movement and NASCO member co-ops in 2001 when they joined the Oberlin Student Cooperative Association (OSCA). From 2003-2005, Rek lived at Millstone Co-op and was on the board of Boston Community Cooperatives (BCC), where they were involved with starting the Seed Pod Co-op. From 2011-2014, Rek was the Member Services Coordinator staff person for Madison Community Cooperative (MCC), where they worked on leasing, training, and education, member debt issues, and member support. During that time, Rek served on the board of NASCO Development Services (NDS), which oversees NASCO’s intensive cooperative development support, including two terms as secretary. Rek also sat on the board of NASCO Properties. Rek joined the NASCO staff from 2014-2017 as Director of Operations of NASCO, where Rek focused on finances, human resources, and member services, as well as visiting member cooperatives and conducting educational workshops for cooperatives. Rek is based out of Madison WI, where they are a member of the local food co-op and two credit unions. Rek’s professional background is focused on administration, finance, and education. Rek works as the Office Administrator for a small software start-up, where they do financial management, human resources, and business planning/expanding our services.

Mer Kammerling has served on the NASCO board for the past two years, first as Diversity Chair, elected from the identity caucuses at the annual Institute (Disability, POC, and Queer/Trans), and now also as the Vice-President, elected by NASCO board members. In Mer’s time on the board, Mer has represented NASCO and all of our member cooperatives at the United Nations at a two-week High-Level Political Forum conference fought for and succeeded in electing working class, Black, trans, and disabled folks both onto the board and the executive committee. As Diversity Chair, Mer has facilitated identity caucuses at the Institute, for those which fit Mer’s identities of POC, Queer/Trans, Disabled, as well as the Collective Liberation caucus of those fighting for justice and liberation. Beyond NASCO, Mer has served on the Board of the Brave Space Alliance in Chicago, which is a Black, trans led organization, striving to support and empower specifically Black trans people in the greater Chicago area.

Ankita Bharadwaj, originally from India, is a member of Madison Community Coop (MCC). She attends the University of Wisconsin- Madison Law School pursuing a Doctor in Juridical Sciences degree. She is a lawyer, legal research scholar, and an activist. Ankita has served the communities she has lived in, in many ways, for example, as Vice President of Middle Eastern Law Students Association (on University Campus) during 2016-2017. She also started a small feminist publication in Madison last year with a few other .womyn and continues to serve as Co-Managing Editor and a columnist there. Ankita also served as a member of the Community Response Team at MCC during 2017-2018. Currently, Ankita serves MCC as Chair of The United People of Color Caucus. She has been on the Board for MCC for more than 2 years and is a proud queer woman of color striving to be a part of intersectional movements. Ankita believes in equality through equity and that the status quo is abysmal and revolution is the way to equal rights and justice to all.

Jeremy Karevich is a student at the University of Waterloo, working toward a bachelor’s degree in computer science. Across the street, he is an active member on the Board of Directors at Waterloo Co-operative Residence Inc (WCRI). Prior to coming to Waterloo to study, Jeremy grew up in Ypsilanti and Chicagoland, where he spent time involved in honors' societies and technology clubs, helping facilitate the organization of community service initiatives and education opportunities. As a kid, Jeremy attended a co-operative preschool and remembers shopping at grocery co-operatives, even though he didn't understand what that meant then. Those experience have helped him appreciate the exposure he has gotten to the co-operative movement and its values even more today. Jeremy continues to share these values and believes in co-operation as a means to sustainable access to goods and services. His experiences at WCRI have given him perspective on a unique co-operative identity in the larger context of housing co-operatives.

Our annual conference, NASCO Institute, is also a space for electing members to our board. Various groups of co-op members began organizing caucuses at Institute beginning in the 1990s in order to build power and promote action within NASCO and member co-ops to address oppressed and marginalized groups. At NASCO Institute 2018, we welcomed four more board members to our team.

Remy Casanova has been a part of the cooperative movement for nearly two years now. Heavily involved with local house government, Remy studies Environmental Science at Austin Community College and hopes to pursue a career in sustainable urban planning. As a first-time diversity chair on the NASCO Board, he hopes to develop effective change for the NASCO organization. In his spare time, Remy enjoys reading, traveling, and eating anything and everything that’s fried.

Lain Jackson is the new Active Member Representative on the NASCO board. Although she is new to the NASCO board, she has been involved in ICC Austin for the past three years and serves as their current board president. Lain's interest in cooperatives is through a lense of accessibility and she passionately represents the interests regarding both physical and mental disabilities. She has just graduated from the University of Texas with a B.A. of Philosophy and a B.J. of Journalism and is now working as an educator at a private school in Austin. In her free time, Lain spends her free time rock climbing and hanging out with her herding dog mutt, Elle, and cat, Kinslee.

Taylor Kinniburgh is currently the treasurer of Horizontal Housing, an egalitarian housing project in Baltimore, MD. With the support of NASCO Development Services, Horizontal Housing grew from a single house squat to a multi-property owning corporation. Taylor's experience includes stewarding land with the Baltimore Free Farm Collective and providing support to the city’s chapter of the non-business union, The Industrial Workers of The World. Currently, they are farming with AmeriCorps. Having been elected through the Working Class Caucus, Taylor maintains a keen interest in extending outlets of cooperation to folks to which higher education is inaccessible.

Leonie Cesvette has served on the NASCO Board of Directors since 2017 and looks forward to continuing her service to the board after being elected at the 2018 Diversity Congress. She calls Lucy Stone Cooperative in Roxbury Massachusetts home. A graduate of Suffolk University, her interests and passions are primarily in anti-gentrification, affordable housing, anti-oppression and pay equity. An accomplished cook, her spare time is spent cooking and creating new recipes for family, friends, and housemates.