Co-op: A Post-Capitalist Housing Model, and also a Board Game 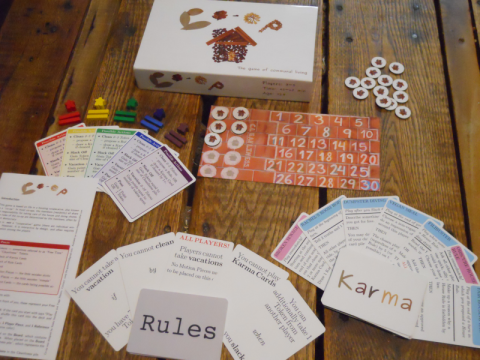 Hello! We're a couple of long-time co-opers who decided that it would be fun to develop a board game about cooperative living. And it's finally finished! INTRODUCING: "Co-op"!

This project's inception dates to an animated and shamefully nerdy conversation, that took place while carpooling back from the NASCO meeting in Ann Arbor a few years ago. It turned out that a weekend of non-stop dialogue about cooperatives wasn't enough, and someone had to ask the dangerous question "what if there was a board game about co-ops?" in a crowded vehicle. It's been a blast to actually make the game and to playtest it with our friends.

"Co-op" is a casual game that draws on personal experiences of the players, treating everyday life in shared housing with a playful irony. In the game, each player represents a housemate in the same co-op. Players must take 1 "action" on each of their turns, the most basic of which are Cleaning and Slacking Off. When a player Slacks Off, they convert some of the house's Cleanliness into their own Free Time; this Free Time can be spent to gain points that help win the game. When a player Cleans, they gain access to Karma (by their good deeds) or may influence the very mechanics of the game by trying to pass a House Rule. Karma and Rules are represented by their own decks of cards: the Karma Cards confer secret advantages that may be played at a later opportune moment, while Rules are drafted from a row of 5 cards that are publicly displayed to all players.

"Co-op" is designed first and foremost to bring people together and to help them get to know each other, as real co-ops do. The Karma Cards add a lot of flavor, by asking players to perform an activity before gaining the card's benefits. Some cards ask players to share their life experience: for example, the card Catch the Slacker asks you to "tell a story about when you got caught doing something wrong". Some are just silly, like the card Vegan Meal which asks you to pick a non-vegan player and do an impression of a chicken around them! And don't get us started on how many times we've lost to Politically Correct... The creative and interactive gameplay feels distinctly co-opy, even though Co-op is not a "cooperative game" (there are individual winners) in the sense of the popular title Pandemic.

We're proud to have made a board game about housing co-ops that can potentially inform and inspire a broader audience. We don't know of any other games that are themed around housing co-ops, and are excited to think that some people may learn about their existence for the first time by playing our game. We are publishing through the print-on-demand service The Gamecrafter, LLC, and the game can be acquired from their website (www.thegamecrafter.com/games/co-op1) and mailed to your (and/or your co-op's) door. We're selling the game at zero personal profit. We think there's something in there for everyone, but co-opers should especially appreciate this game and where it's coming from.