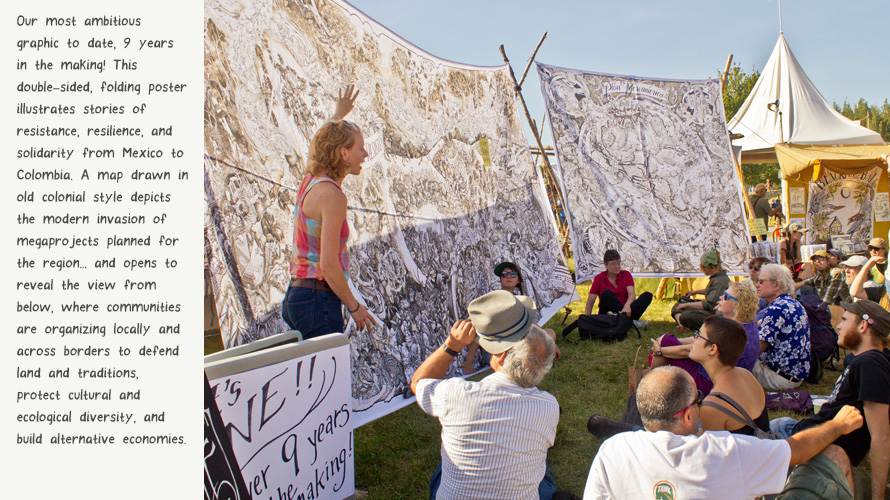 These documents are supporting materials for a workshop titled "Resisting Corporate Control and Building Cooperative Power," led by Molly Shea (Beehive Design Collective) at the 2014 NASCO Institute.
--
The Mesoamérica Resiste graphics campaign is the third and final image in the Beehive’s trilogy about globalization in the Americas, focusing on resistance to mega-infrastructure projects that are literally paving the way for free trade agreements that devastate local economies and communities.
In 2004 an initial group of Bees traveled from Mexico to Panama over 5 months to meet with people on the frontlines of resistance to a regional development plan then known as Plan Puebla Panama (PPP). The announcement of the PPP in 2001 had sparked powerful cross-border organizing against its industrial scale mega-projects, like super-highways, dams, and power grids. In the following years our ongoing, intensive grassroots research took a variety of forms, from large international gatherings to local round tables, from interviews to informal conversations.
The stories in the graphic come from current struggles, but are also rooted in the legacies of over 500 years of colonialism in the Americas. A banner across the top reads, “Every time history repeats itself, the price goes up” – reminding us that we are in an era of extreme loss of cultural and ecological diversity and rapid climate change. Through the lens of Mesoamerica, the graphic tells the big picture story of what’s at stake across the globe with the neoliberal model of “development,” and what we’ve already lost.
This project reflects our efforts to go beyond illustrating just the bad news, to also sharing stories of collective action and inspiration. The inside of the poster tells stories of grassroots organizing and community resilience. A multitude of characters symbolize strategies and tactics for building and defending autonomy. We’ve depicted over 400 species of insects, plants, and animals that are native to somewhere between Mexico and Colombia, giving a glimpse into the incredible biodiversity of the region.
--
The Beehive Design Collective is a wildly motivated, all-volunteer, activist arts collective dedicated to “cross-pollinating the grassroots” by creating collaborative, anti-copyright images for use as educational and organizing tools. We work as word-to-image translators of complex global stories, shared with us through conversations with affected communities.
--
The first file is the English narrative booklet that accompanies the
Mesoamérica Resiste poster.
The second file is the Spanish narrative booklet that accompanies the
Mesoamérica Resiste poster.
The third file is a large-scale jpg of the outside of the Mesoamérica Resiste poster.
You may download the full poster (outside and inside, print-resolution) here.