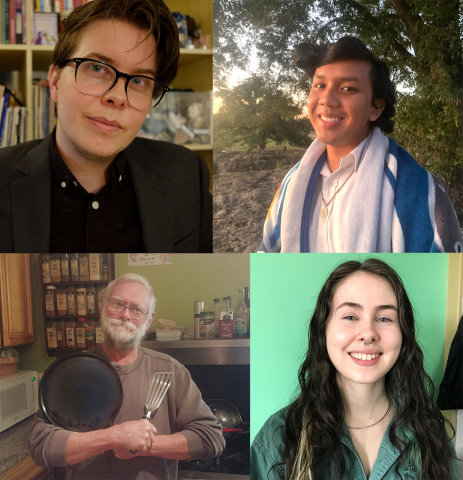 (Pictured from left to right)

Lee Pepper (he/they) is delighted to be elected for a second term on NASCO’s Board. Lee works as Communications Co-ordinator at the Co-operative Housing Federation of Canada. He is a guest on unceded Algonquin land in so-called Ottawa, Canada, and is passionate about non-market housing and other issues of justice and equity in their community and beyond. They look forward to continuing to foster co-operation among co-operatives internationally.

Vincent is a recent graduate of the University of Texas at Austin and has been involved in the cooperative world for the past three years. Recognizing how cooperative living affords a sense of belonging and ownership to individuals from all walks of life, Vincent hopes to continue strengthening and expanding upon those values through NASCO. Vincent is currently the director of the Halstead Cooperative in Austin, Texas as well as the chairman of the College Houses, Inc. board of directors.

I have been part of Nickle City Housing Coop since 2010.  I have grown immensely in my time here.  I thought I had a good idea of what co-op living was all about.  Boy was I mistaken.  I have done plenty in sharing my gifts with Plankton House where I have resided.  I have fixed a lot of things, been part of the governance of NCHC, baked a lot of bread, made a lot of soup.  One idea I hope to contribute to is helping NASCO to be a part of building a new economy that serves everyone.  It has been an amazing journey and I feel like I have only just begun.  As Marv Levy would say, "Where would you rather be than right here right now!?!" Thank you all for this opportunity to serve on the NASCO Board again.

Hey everyone! I'm Maggie (they) and I'm a 7th year co-oper at ICC Ann Arbor and have served a one-year appointment on NASCO board prior to being elected. I grew up in Alpena, MI before moving down to Ann Arbor for school where I studied German and psychology. I love bonfires, river hangs, general shenanigans, and talking all things co-op with anyone who will listen.